This blog and some info within is out of date, with the occasional exception of the Chameleon Pigment Suppliers list, but it stands as is for reference. The date of any updates are usually noted at the top of each page/entry. As of 1/08/20, all pages have had dead links removed/repaired as well as 2010 entries and 2011 Jan-July.

It should come as no surprise that I have a massive collection of glitter, enough to fill two empty cat litter buckets (because those things are so handy for storage), one for solvent resistant, nail polish glitters and the other for the crafting variety. The Glitter Hippo glitters are the crafting type but no less fun to play around with, especially the color shifters and I have them to show you, as well as the “project” I’ve been using them for the last couple days.

Glitter Hippo’s glitters aren’t solvent resistant and Glitter Hippo doesn’t say they are- I’m putting that out there because this is a nail polish blog usually but every once in a while, I like to share crafty things too. They will bleed when exposed to polish, such as when being sprinkled onto wet polish, so they'd bleed in nail polish too- and that was ok with me since I bought the larger size for glittering Christmas ornaments last year and didn't intend to use them for polish. I like the look of the glitters so much that the ornaments stay on display year-round with my glass collection, and when I saw those glitters were being sold in a finer size, I knew I’d eventually buy them too. 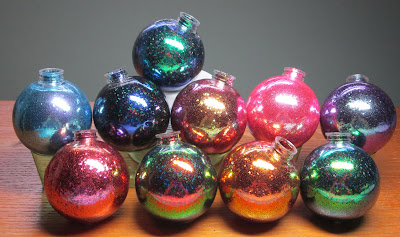 Last year's ornaments prior to having the tops replaced, showing the 1/24" size color shifters. 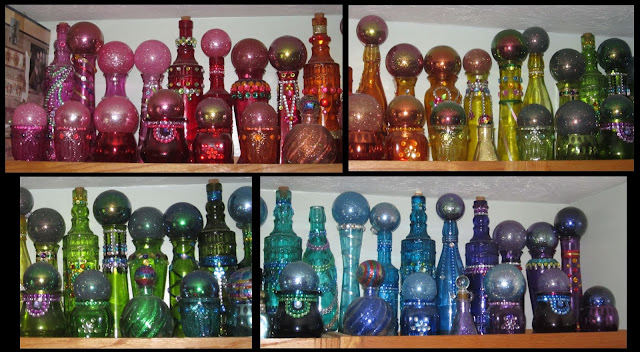 Their place-of-display (in four shots) on top of my kitchen cabinets, bringing more color into the room.

The glitters are sold in 20 gram packages and are currently on sale, priced at $3.00 instead of the regular price of $4.00. That’s a really good deal, because true color shifting glitters are slightly harder to find (I’ve looked) and usually come in smaller package size with a higher price tag. They are mostly hex cut glitters but some colors are available in other shapes too such as stars, diamonds and butterflies- 20 grams, normally $5.00, also on sale for $3.00.

Rather than attempting to show you the color shift of each glitter with still photos, I made a short video for each set, one for the 1/24” size and one for the 1/128”, then uploaded them to my polish-related You Tube account (links for them below). Please excuse both the jerkiness of my filming and the background noise, I don’t have a lot of experience making videos, plus one of my cats wanted to use the table more than I did lol (no one eats at that table for the record). 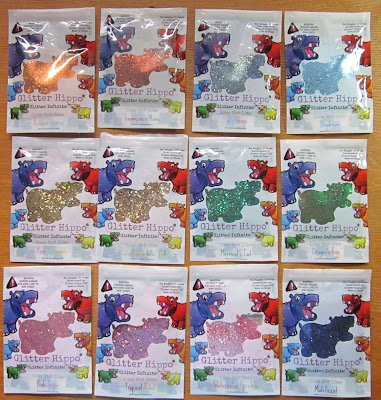 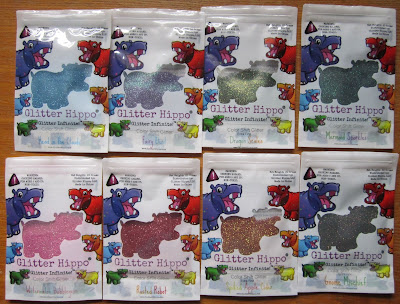 When the new, finer sized color shifters arrived, I turned them into ornaments too (using Beacon Glitter It!), then looked around for something else to use the glitters on. After rejecting various ideas, I ended up grabbing the oval glass cabochons and the clear acrylic adhesive ones I bought for my not-quite-successful nail polish pendants years ago and tried glittering the backs using clear nail polish as the adhesive. I made many before I realized the exposure to the wet polish was causing the color to bleed from the edges of the glitter and while the effect wasn’t awful, it was ruining some of the color shifting. Below is Maleficent on the back of a glass cab, where the contrast between the dark purple of the glitter and the now green edge bleed is most obvious. 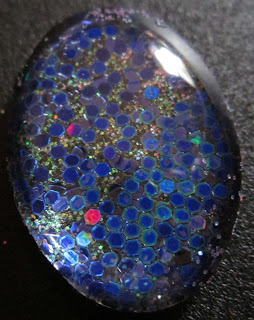 I tried Mod Podge Gloss next, using it in the same way as the clear nail polish. I applied a thin layer of Mod Podge, sprinkled some glitter on and pressed it down, until the back was fully covered. Let dry and repeat… typically took three or four layers until opaque from the front. The MP goes on white but dries clear and even though it will dull the shine of glitter a little, the glass helps offset that. 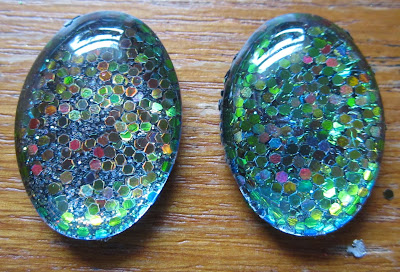 On the left is the clear polished cab (with edge bleed), the right is the Mod Podge'd cab

While the cabs were flipped face down and drying, I realized the back looked a bit like a simulated druzy quartz (Google it if you don’t know what I am talking about) and I kind of like that effect too. 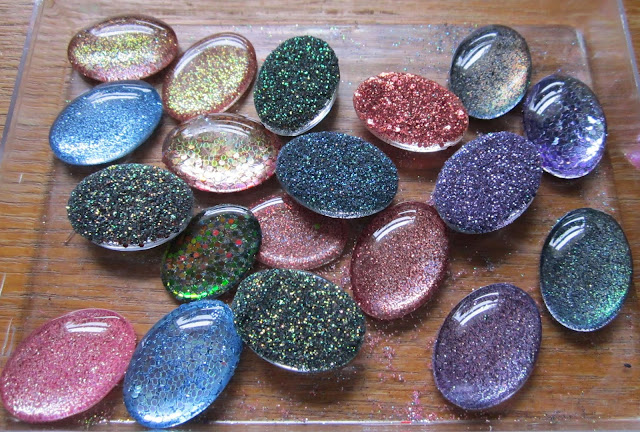 I moved on to glittering those decorative clear glass (flat-backed) rocks the Dollar Tree sells and wanted to add a couple things about using the Mod Podge to do this.
- It doesn't matter a lot what paint brush you use for the first coat but for any successive coats, I'd advise a softer brush with a slightly thicker layer of the Mod Podge. A firmer paint brush will remove some glitter while you're applying the MP which you don't want, and the thicker application helps with drag.
- Press down lightly on the glitter immediately after sprinkling it on and leave it alone to dry completely, then knock off the excess glitter. You'll have better coverage that way.
- After you've put as many layers on as you want, seal the back with a final layer of Mod Podge to keep the glitter from falling off.
- One final note on using Mod Podge on glass. Glass isn't porous and the adhesive bond is not permanent so if you're rough with them or you pick at the glitter purposely, it will come off. I colored wine glasses using Mod Podge+food coloring for decoration and a couple years later was still able to peel it off the glasses. I used it on my front door the same way to simulate stained glass and know when I get tired of looking at it, removing it won't be a problem.

I have no idea what I'll use these for, maybe like large, smooth rhinestones or maybe I'll just throw them in a bowl as decorative pretties.

Go check out Glitter Hippo's glitters if you haven't already. They sell much more than color shifting glitters, all affordably priced- see categories below. -MK

Thank you for taking the time to visit my blog- and for leaving a comment if you do. Some get away from me but I try to respond to every one.